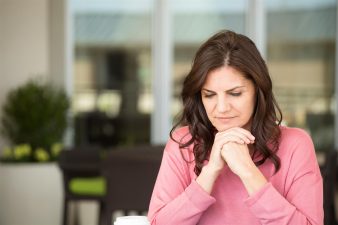 Symptoms of anxiety can include feeling sad or becoming stressed easily.

What do we mean when we say, ‘menopause anxiety’? This term refers to the increased tendency for women experiencing menopause, peri-menopause or post-menopause to suffer from anxiety.

Changing hormone levels, particularly oestrogen have been repeatedly shown to alter bio-feedback systems in the body. These affected systems include those using serotonin (the ‘happy chemical’) and noradrenaline (important in ‘fight or flight’ responses), which studies suggest may be associated with changes in mood.

This means that declining and fluctuating levels of oestrogen and progesterone play a role in anxiety symptoms (although other psychological and medical factors can also influence anxiety).

Anxiety is a common cognitive or psychological condition whereby you experience fear, worry, or nervousness on a constant or almost-constant basis. These feelings don’t go away and may get worse over time, sometimes affecting you to the point where simple, day-to-day tasks and situations become overwhelming.

The most common mental health condition in Australia, anxiety affects 1 in 4 Australians on average and 14% of all Australians are affected by an anxiety disorder every year. Importantly, studies have shown that women are significantly more affected by anxiety than men are.

While all women will experience hormonal imbalance associated with menopause, not all women will suffer from the same symptoms. It’s important that women understand the different types of anxiety, different symptoms, and possible causes to allow them to get help and find relief whilst going through menopause.

There are several different kinds of anxiety, with different symptoms, frequency of occurrence and concerns.

Characterised by uncontrollable worry, Generalised Anxiety Disorder (or GAD), is an anxiety disorder that impacts day-to-day life. Women are more likely to experience this type of anxiety, which will affect about 6% of Australians in their lifetime.

Also known as ‘social phobia’, social anxiety disorder is a condition where anxiety affects your life, preventing your participation in everyday personal and professional social events. While many people experience some degree of nervousness or anxiety when faced with new or challenging social situations, people with society anxiety are likely to experience fears and physical symptoms that are much more extreme.

Roughly 10% of Australians will experience social phobia during their lifetime, with suffering more common in women than in men.

Obsessive Compulsive Disorder (or OCD) affects a far lower percentage of people than other anxiety disorders (less than 1% of people in Australia), developing in late childhood or early teens.

OCD is characterised by two kinds of symptoms, being obsessive—irrational thoughts and fears—and compulsions—repetitive behaviours/rituals used to reduce anxiety.

Are you experiencing this symptom?

Symptoms of anxiety can vary greatly depending on the individual, the type of anxiety, and the situation prompting the anxiety. Some of the symptoms that may indicate anxiety include;

Some people may also experience panic attacks due to anxiety. Panic attacks can occur at any time and usually last for more than a few minutes, often characterised by shortness of breath, sweatiness, a racing heart, chest pain, nausea, and numbness or tingling. Other symptoms include a sense of impending doom or danger, fear of dying, depersonalisation, difficulty concentrating, choking, or trembling.

There are a range of remedies that can address menopause-associated anxiety. Some of these solutions are pharmacological and will require consultation with your doctor to determine the best approach for you.

Some possible treatments include;

Other possible menopause anxiety remedies are within your control. These options are well worth trying out before resorting to other methods;

The Australian Menopause Centre Can Help

If you’re feeling anxious or worried, don’t wait before reaching out for help. It’s crucial that you talk to qualified medical practitioners who can help guide you towards improving your quality of life and support you through the challenges of menopause. Don’t suffer in silence.

If you are experiencing any of the above symptoms, please do not hesitate to contact us on 1300 883 405 to book a  no obligation free first consultation and discuss your concerns with one of our doctors.