A woman is defined as having entered the menopause stage when they have not had a period for 12 months (1). During the period leading up to menopause your body’s hormone levels begin to fluctuate and it is this fluctuation that causes a woman to experience symptoms such as: 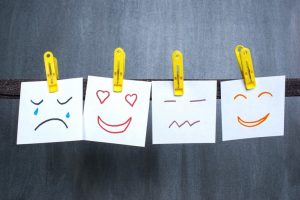 During the period leading up to menopause your body’s hormone levels begin to fluctuate and it is this fluctuation that causes a woman to experience mood swings.

What are Menopause Mood Swings?

Mood swings are one of the most common symptoms in menopause and peri menopause.

Mood Swings are described as an extreme or rapid change in mood. Hormonal imbalance experienced during Peri Menopause and Menopause where there are fluctuating hormone levels of oestrogen, progesterone and testosterone results in mood swings that can be wild and erratic.

Women often find themselves reacting to the slightest things with unexplainable anger, tears, sadness or irritability. There can be great emotional stress suffered by women because of these mood swings and often result in people around them being affected as well. Relationships suffer, and women find themselves wondering what is happening.

What Causes and Triggers Mood Swings?

During the lead up to menopause a woman’s oestrogen levels begin to drop and hormone levels begin to fluctuate like a roller coaster and it is this roller coaster like effect that causes women to experience symptoms of mood swings. Statistics from the North American Menopause Society (NAMS) suggests up to 23 percent of women will experience mood swings before, during and after menopause.

Evidence suggests that mood swings in menopause and peri-menopause can be attributed to hormone fluctuations which relate to a corresponding imbalance in levels of serotonin.

Serotonin is a neurotransmitter in the nervous system which assists feelings of happiness and well – being. Serotonin helps to fight against anxiety and depression and assists feelings of hope, peace, optimism and relaxation. If the levels of serotonin are too low or too high, there will be a corresponding change to mood and emotions. Low levels of serotonin contribute to distress and high emotions, sleeplessness, anger, panic attacks, headaches, anxiety and even certain cravings. The changes to serotonin levels can be related to the changes in oestrogen levels. Not only do serotonin levels contribute to mood swings other symptoms of menopause have their own effect on mood swings.  Hot flushes, sleep deprivation resulting in tiredness and fatigue can contribute to these fluctuations in mood.

Changes in Progesterone and Testosterone can also be implicated as a cause for depression or mood swings. When either or both these hormones become depleted, women may feel symptoms of anxiety, lethargy, irritability and moody. This can also occur during a regular cycle where an imbalance of hormones occurs each month, particularly leading up to a period.

Why is Moodiness Cyclical in Some Women?

If there is a mismatch in hormone production during the luteal phase, and oestrogen dominates, most women will start to feel moody.

The ovarian production of oestrogen and progesterone control a woman’s cycle.

Both hormones are released from the ovaries in response to hormones released by the pituitary and controlled by the hypothalamus in the brain. However, women respond differently to these hormones, and this is thought to relate to that person’s sensitivity to the hormones.

During a regular menstrual cycle, the first day of a bleed is the first day of that cycle. Both oestrogen and progesterone are initially low and remain low during the first phase – the follicular phase. Around the middle of the cycle, there is a burst of oestrogen production called the mid-cycle surge. This is followed by a gradual increase in both oestrogen and progesterone through the second half of the cycle – the luteal phase.

If there is a mismatch in hormone production during the luteal phase, and oestrogen dominates, most women will start to feel moody. This may also occur during the mid-cycle surge. This is commonly referred to as PMS – Premenstrual Syndrome

In early menopause, moodiness can also by cyclical. This is because, although there may not be a menstrual bleed each month, the ovaries may still be producing hormones in a cyclical fashion. This will result in irritability and moodiness presenting worse at a particular time each month – reflecting the same oestrogen progesterone mismatch.

Other Factors That Cause Mood Swings:

There are many non-hormone causes of mood swings, that may be confused with being hormonal. These include:

Are you experiencing this symptom?

What Can I Do to Cope with Mood Swings?

Often, the emotional symptoms of menopause can be managed by lifestyle changes and focusing on finding ways to reduce stress and promoting relaxation.

Passion flower tea has been observed to provide calming and mood elevating effects.

This may be due to the interaction of the flower’s compounds with the receptors in the brain.

Hormone Replacement Therapy
In recent years, one of the most important shifts in menopause research and treatment is the recognition that body-identical hormone treatments have proven to be much safer than synthetic hormone treatments. This is something that the doctors at the Centre have supported since our inception in 2003. This has also meant that commercially produced TGA-registered body-identical hormones are available in specific doses.
‘Body identical’ hormone therapy refers to a hormone that is identical to those produced by the body. These are TGA approved treatments and have a documented profile of benefit as well as short term and long-term risk. Commercially available body-identical oestrogen is available in Australia as tablets, transdermal patches or gel in specific doses. Examples of these include Estraderm, Estradot, Climara, Estrogel and Sandrena gel. It is also available for topical vaginal treatment – Ovestin and Vagifem.
Commercially available body-identical progesterone is now available in capsule form in Australia (as Prometrium). Prometrium is currently available as a 100mg capsule. Many of the studies/research available on commercial products do not extend to bioidentical hormones alone, as they predominately focus on synthetic hormone preparations. In studies that use bioidentical hormones, it does appear that the health outcome is more favourable compared to the synthetic alternative.
Bio-identical Hormone Replacement Therapy (BHRT)
These products are compounded to an individual prescription from your doctor. Althoughthe active constituents are pharmaceutical USP grade bioidentical hormones, the preparations are not individually TGA approved. Some large cohort studies including the French E3N study, have been conducted on patients using compounded bioidentical hormonesand these studies have contributed to the development and controlled trials of set dose products that have been listed on the TGA register. However, because each prescription is compounded for an individual’s needs, there is no data available from controlledstudies on these specific preparations regarding efficacy and safety.
Compounded bioidentical hormones may provide an option for patients where a commercial/pharmaceuticalproduct does not achieve the desired therapeutic outcomes for patients and an alternate strength or mode of application, which is not commercially available, is indicated.
References:
1.       https://www.ncbi.nlm.nih.gov/pmc/articles/PMC3127562/pdf/mayoclinproc_86_7_010.pdf
2.      https://www.ncbi.nlm.nih.gov/pmc/articles/PMC2211383/

If you are experiencing hot flushes (flashes) please do not hesitate to contact us on 1300 883 405 to book a free no obligation first consultation and discuss this with one of our doctors.