With the recent wet weather on the eastern coast of Australia, many people are finding that their homes are affected by mould. But what is mould? Where does it come from and what health effects does it pass on to humans?

Mould is a type of fungi that occurs naturally in the environment. Mould can be found both outdoors and indoors and it can have a musty-like odour (although more recent research indicates that it is not actually the mould that smells, but the bacteria that it produces). (1)

Mould produces tiny particles call spores, which are carried in the air, helping the mould to grow and spread. These spores can hold toxic chemicals, called biotoxins, that are able to be released into the air.

High amounts of mould can occur in areas of a building that have poor ventilation or become wet and damp. These conditions can increase the amount of mould spores and potentially lead to health problems. People can come into contact with mould spores through inhalation, skin contact or by eating mould affected food. (1)

Where does mould occur?

Mould is very common in buildings and homes. It will grow in places where there is a lot of moisture, such as around leaks in rooves, windows, pipes, or where there has been flooding. It grows on paper products, cardboard, ceiling tiles and wood products. It can also grow in dust, paints, wallpaper, insulation, carpet, fabric and upholstery.

Mould from outside can attach itself to clothes, shoes and pets and can be carried inside. When the spores drop in places where there is an excess of moisture, they will grow.

Health effects of mould exposure include a runny or blocked nose, irritation of the eyes and skin and sometimes wheezing. For people with asthma, inhaling mould spores may cause an asthma attack. Very rarely, people may develop a severe mould infection, usually in the lungs. It is important to note that most people will not experience any health problems from coming into contact with mould.

People with asthma, allergies, or other breathing conditions may be more sensitive to mould. People with weakened immune systems (such as people with HIV infection, cancer patients taking chemotherapy or people who have received an organ transplant) and with chronic lung diseases (such as Chronic Obstructive Pulmonary Disease (COPD) and emphysema) are more at risk of mould infection particularly in their lungs. (2)

Chronic Inflammatory Response Syndrome (CIRS) is a multi-system, multi-symptom illness caused by inhaling biotoxins produced by micro-organisms such as mould and bacteria found in water-damaged buildings. CIRS, when caused by a water-damaged building, is more commonly known as Mould Illness. However, tick-borne infections such as Borrelia (Lyme disease) and Babesia, toxigenic blue-green algae (cyanobacteria), and certain dinoflagellates (associated with ciguatoxin in reef fish) can also produce biotoxins and potentially cause CIRS. (3)

CIRS affects more than just one body system and can have many symptoms. Dr Ritchie Shoemaker has found that 35 of the common symptoms could be classified into 13 clusters. CIRS is now considered when a person has at least 1 symptom from 8 or more clusters (see the image below) for longer than 6 months. A diagnosis is reached after further testing, including genetic testing. We know that approximately 24% of the population carry the gene which predisposes them to CIRS. 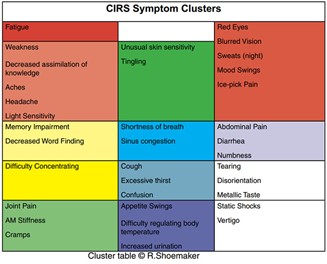 What can you do?

You can control mould growth inside your home by:

If you have mould in your home, it is best to remove it as soon as it appears. This may take a bit of elbow grease! Here are some tips on how to do it (2):

Should you get your home tested for mould?

Most mould is visible, so it is generally not necessary to test for mould. However, it could still be present in wall or ceiling cavities. If you think you have mould in your home, but cannot find the source, you could consider contacting a building biologist for further investigation. You can find more information and contacts for building biologists here.

If you are concerned that you have mould illness, speak to your healthcare practitioner, or book an appointment with one of the AMC naturopaths or nutritionists.

About The Author - Hayley Derwent

Hayley is a holistic nutritionist whose vision is to inspire and educate patients about food and lifestyle to positively enhance their health and wellbeing. She provides a safe and caring environment by listening, teaching and supporting people and working in partnership with them to strive towards good health and happiness.

How to Prevent and Clean Up Mould

I live in Sydney and have mould in my house. Let’s face it, is there anyone living on the eastern coast of Australia who doesn’t […]

As we start to head into the cooler months, the incidence of coughs and colds increases, not to mention the dreaded “C” word! This simple […]