Though not as common as other menopause symptoms, occurrences of dizziness can affect some women during menopause. At this point, researcher are not completely certain about the link between menopause and dizziness. 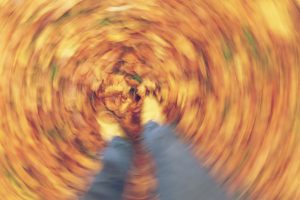 Dizziness can result in feeling light-headed and disoriented.

Rapid fluctuations in oestrogen and progesterone hormones associated with menopause can result in dizziness because they affect other bodily systems. This may include impacting the inner ear, the metabolism, the heart, and the brain. The normal aging process is also implicated in the dizziness experienced during menopause.

It is likely that women experience dizziness during menopause as the aging process and changes in hormone levels affect the body. Dizziness is not a disease but a symptom of something happening inside the body.

In this article, we provide you with an overview about menopause dizziness; its causes, the symptoms and provide some suggestions for dizziness treatment to help you gain control of this menopause symptom.

What Is Dizziness and What are the Causes?

The term ‘dizziness’ covers a range of sensations that you might experience during dizzy bouts. These sensations can be very worrying and are often described as;

Typically, menopausal dizziness bouts don’t last very long. Despite this, they can still be very concerning, leaving you disoriented and feeling out of sorts.

There are three different variations of dizziness that you may experience:

As discussed above, hormones are a possible cause of dizziness during menopause; however dizziness may also result from hormones causing other conditions which may lead to dizziness. Such conditions include;

The fluctuations in hormone levels can often lead to dizziness during perimenopause, which is the transition to menopause. Periods become irregular and this phase can last anywhere between four to eight years when menstruation will stop entirely. This will typically occur in women between ages 40 and 58.

As the ovaries begin to decrease their production of oestrogen and progesterone, this affects the hormones that maintain the reproductive system. These same hormones affect other organs such as the brain, the heart, and the pancreas.

You may notice these effects in the following areas of your body: 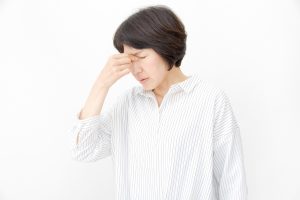 Dizziness can affect your ability to complete simple tasks, and may make you feel as if you’re about to faint.

Dizziness can manifest differently from woman to woman depending on your individual constitution and the circumstances surrounding your dizzy episode. However some general symptoms include;

Are you experiencing this

These symptoms may be triggered or exacerbated by walking, standing up from a sitting or lying position, or moving your head. Nausea may accompany dizzy bouts as well.

If you begin to feel dizzy

It is best for your own safety and the safety of others that you avoid driving a car or operating heavy machinery if you feel even the slightest bout of dizziness approaching.

Because the links between menopause and dizziness are not as well documented as other menopausal symptoms, addressing bouts of dizziness can be complex. However, we’ve provided a few dizziness treatments below which may help reduce the number and severity of your dizziness episodes.

Some of these remedies are designed to treat the possible hormonal causes of menopause dizziness, while other options rely on medication for dizziness itself. These possible remedies require consultation with a doctor, and a prescription for the treatment.

It is also possible that dizziness bouts can be somewhat alleviated through various lifestyle factors that are within your control. Consider whether some of these methods may help reduce dizzy sensations for you;

It may also be worthwhile to maintain a journal with the dates, times, and circumstances of your episodes of dizziness so that you can pinpoint whether there are any other specific factors that could be triggering dizziness.

Talk to the team at The Australian Menopause Centre

If you’re experiencing episodes of dizziness and want help, don’t hesitate before reaching out.

If you are experiencing any of the above symptoms, please do not hesitate to contact us on 1300 883 405 to book a  free no obligation first consultation and discuss your concerns with one of our doctors.